Per the results of the open poll Elon Musk posted November 18, Donald Trump’s controversial Twitter account will be reinstated on the platform.

The people have spoken.

Trump will be reinstated.

Throughout Trump’s 2016 and 2020 campaigns and his single term as President, he used Twitter as his private soapbox. His ability to speak directly to his constituents played a major role in his success as a candidate. As USA Today chronicles, it also produced a great deal of chaos.

Trump was finally banned from Twitter for inciting violence after publicly defending the attack on the U.S. Capitol on January 6. He digitally decamped to competing platform Truth Social, where he continues his unique approach to messaging as a public figure and, as of November 16, the first declared Republican Presidential candidate of 2024.

What Trump’s presence will mean for Twitter remains to be seen. The former President hasn’t even confirmed he’ll return; Musk has just said his account will be unbanned in keeping with his poll results.

In some ways, the poll itself is even more interesting. Musk may have just previewed a new direction for Twitter, one very different from his original vision.

First, a few caveats. It’s unclear at this point whether Musk or anybody remaining at Twitter reached out to Donald Trump or his handlers before conducting the poll. The results aren’t binding, and of course Trump himself hasn’t even said whether he cares to re-engage with the platform that unceremoniously threw him out. In an earlier statement to Reuters, the former President expressed reluctance to rejoin, in fact. “I don’t see any reason for it,” Trump said.

It’s also worth noting that the poll-driven approach is in direct contradiction to what Musk committed to just a few weeks ago. As of October 28, Musk had promised that no accounts would be unbanned until a “content moderation council” had been formed. In his own words: 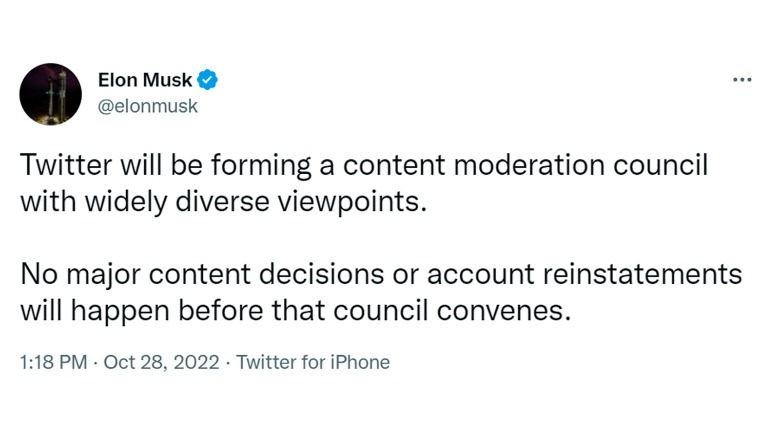 It remains uncertain whether Musk opted to consult any such council, or simply decided to stage the poll himself. The Trump question gathered over 15 million votes and, per Musk’s Twitter, was seen by 134 million people. There’s no question the process is flawed –- as Mashable notes, Musk himself has excoriated bots and spam accounts for their disproportionate impact on Twitter polls –- but engagement is engagement, and these are major numbers.

The poll-based approach also offers Musk a way to rebrand Twitter and himself. In terms of public relations, the Twitter acquisition has not gone Elon Musk’s way. Much chaos has been reported after the outspoken new CEO issued stark ultimatums to staff. He’s even been the butt of several jokes. Outright asking Twitter what it wants — without the safeguards he initially promised — represents a new narrative, and it’s unclear whether that’s one the already critical user-base will accept.